A Diverse Set of Skills 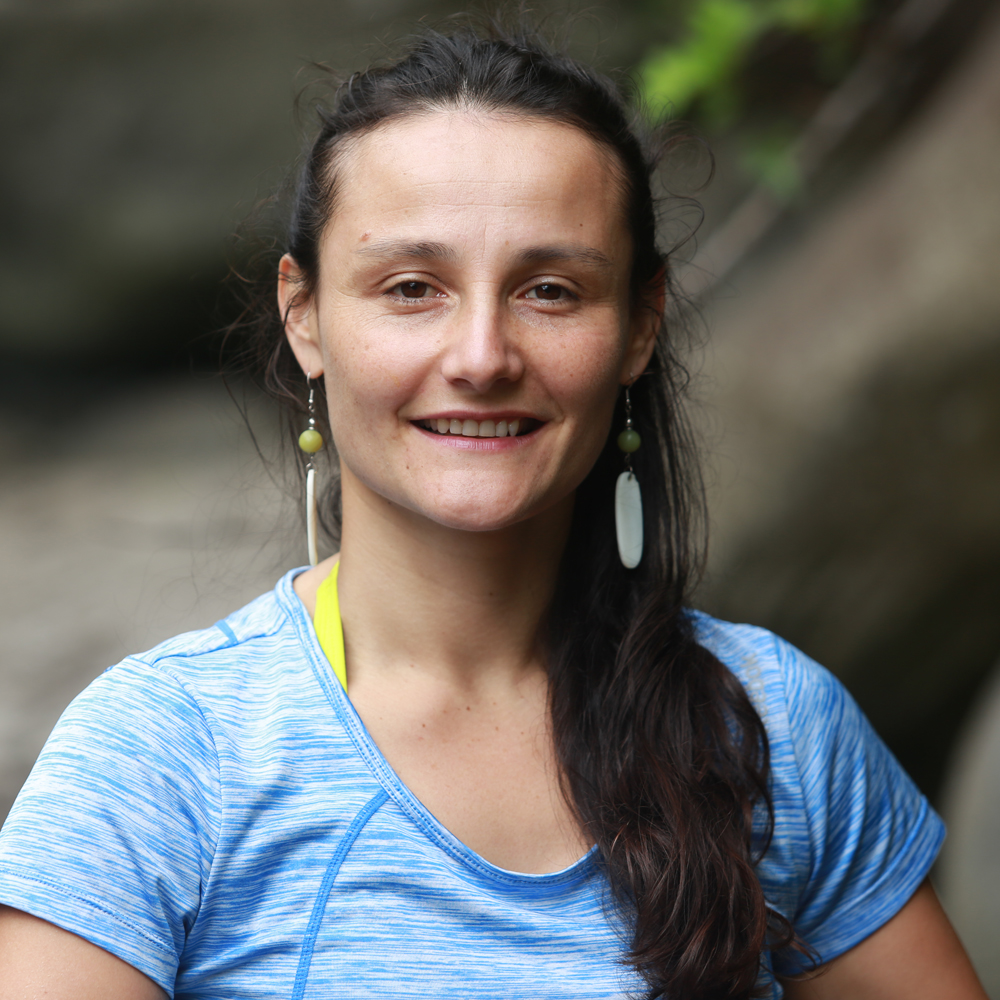 2005 – 2007: California, USA
• Attended an English Health Training Program at the San Francisco State and a Professional Development English Program for International Women at the Mills College.
• Renewed a Pilates Certificate through the Physical Mind Institute.
• Became a certified member of the American Fitness Association after completing aqua fitness and yoga programs.
• Worked as a Pilates and Aqua Instructor at Bay-0-Vista Tennis Club, Oakland Hills Tennis Club, and the Oakland YMCA.
• Therapeutic Pilates instructor at the Finding Center.

2008: – Move to Maui, Hawaii
Worked as a Pilates instructor: Have taught various courses including the Introduction to the Nervous System to Pilates and the Neurokinesis Baby Training Program. Developed and worked in a High-Performance program for a professional skier Julia Mancuso.

Alejandra is a savant in the fields of kinesiology, neurology, and various bodywork modalities including Pilates. Before coming to Maui, she has researched extensively in Chile, Mexico, and Cuba and developed programs for adults and kids with neurological conditions including spinal cord injury. With her many years of researches and experiences, she developed an unique technique Neurokinetic Pilates (NKP), which utilizes the ability of the brain and nervous system to change and create new connections in the body. Using NKP, she has been working with people from all types of backgrounds including spinal cord injury patients and Olympics and Paralympics athletes. She is the master teacher at the studio Body Wellness Hawaii and all instructors are trained by her.

2010: Traveled to California to continue her education with Recovering Functions as a Bobath Instructor, a world recognized neurologic rehabilitation technique.

2014: Received the USOC Order of Ikkos Award
Received the award after assisting Julia Mancuso at the Sochi Olympic. The USOC recognized the effort of a fitness coach with the Order of Ikkos award, selected by each US medal-winning team. The medallion award is a symbol of excellence in coaching as represented by athletes’ achievement as an Olympic or Paralympic Medalist. 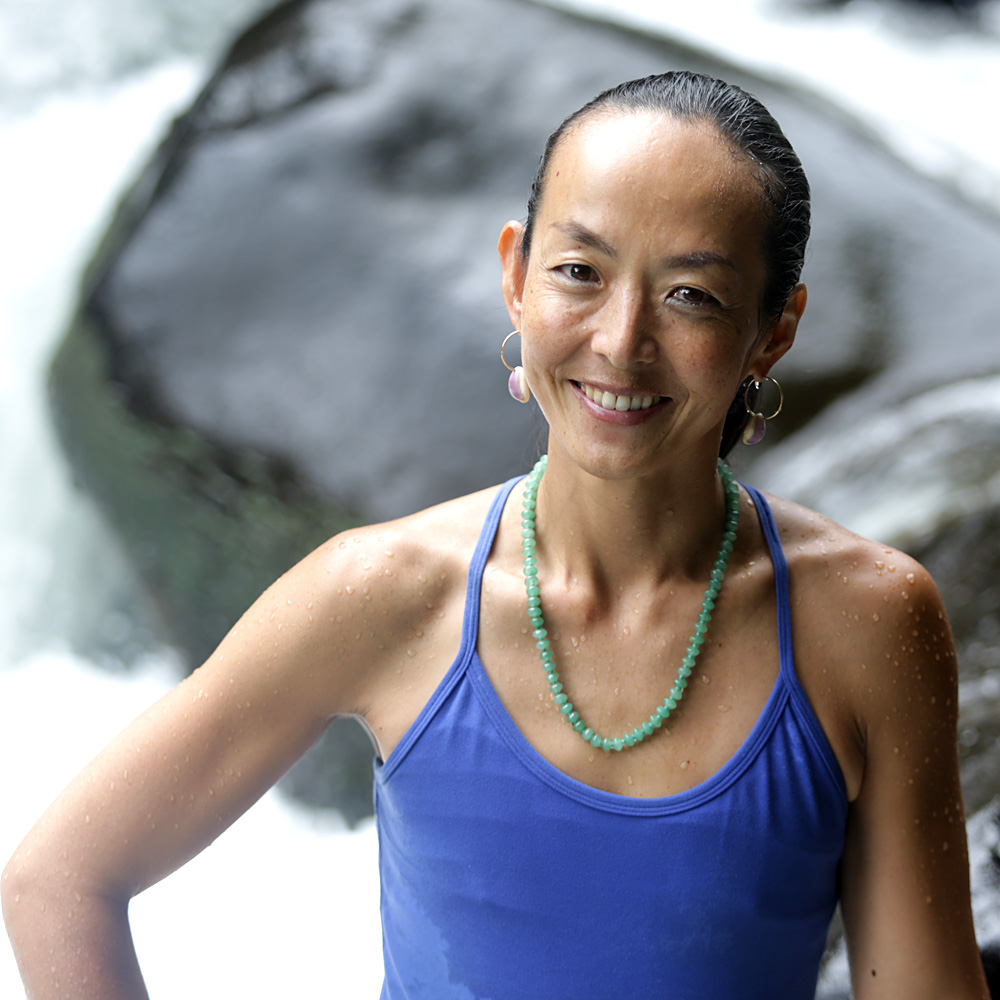 Kazuko was born and raised in Niigata, Japan at the base of a ski mountain. It was there where she became a competitive athlete in skiing. Throughout her professional career, she competed in a number of international competitions including the Nagano Olympics in 1998.

Throughout her career as a professional athlete, she experienced different types of training and bodywork in depth. During her intensive trainings, she discovered how powerful a body could be depending on how one educated the body and gave the freedom to move.

Her experiences and understanding of the body led her to search for ways to bring balance and the optimum condition to the body, which was a journey that brought her to the United States to deepen her studies. In the United States, she became a full-certified Pilates instructor at Metropolitan Pilates Seattle under Dorothee Vandewalle in 2006 and a certified practitioner of Yamuna Body Rolling in 2008.

Working as a personal assistant to an Olympic athlete, Julia Mancuso, Kazuko met Alejandra when searching a way to bring the optimum condition to Julia’s body. She believed that Alejandra’s way of working with the body through the nervous system was effective to bring out high performance and had Julia work with Alejandra. After working with Alejandra, Julia achieved great results in Winter Olympics in 2010, and Alejandra and Kazuko together founded Body Wellness Hawaii in 2012 to make Neurokinetic Pilates more available to people.

Since Kazuko started working with Alejandra, she integrated the Neurokinetic Pilates (NKP) concepts into her release technique and aptly called it Neurokinetic Release (NKR). NKR supports the progression of changes that clients are going through in NKP sessions by releasing tensions in body and connecting the body through muscular chains in a healthy and optimum way. 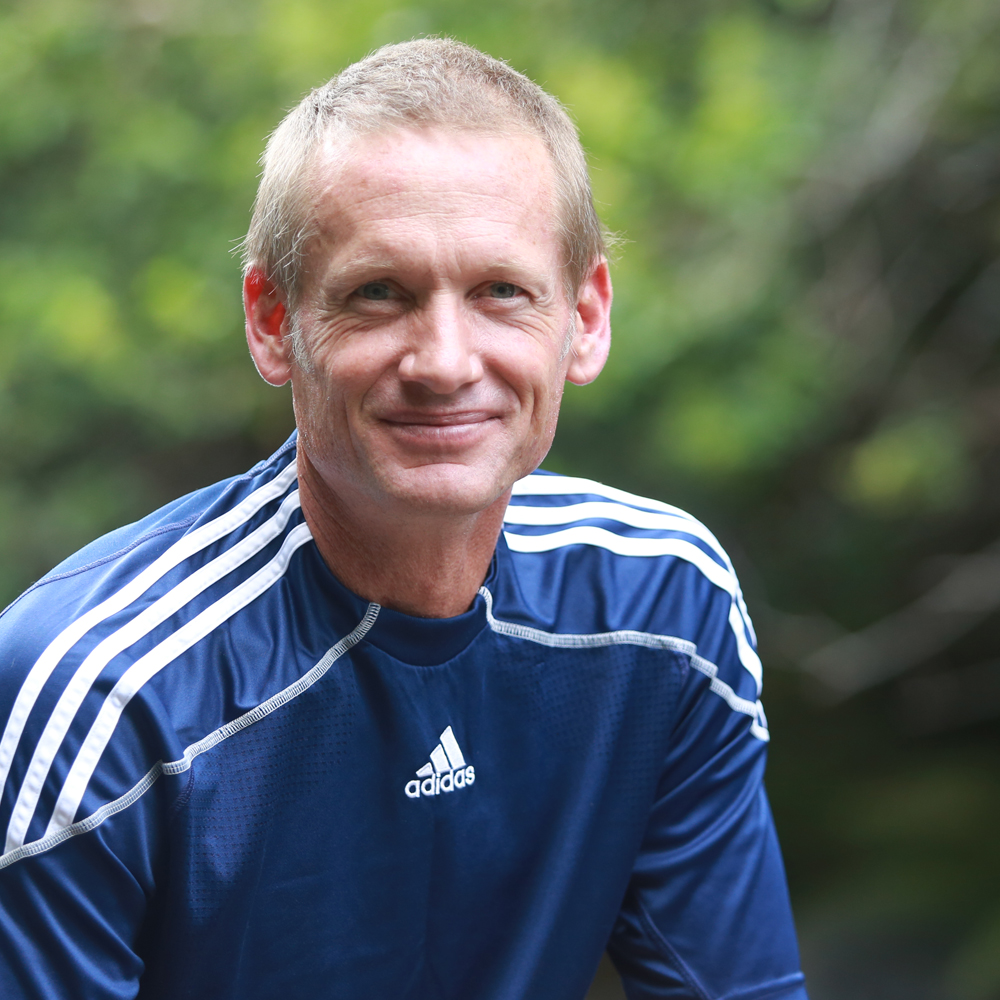 Raised on Maui, I have always been active, athletic, movement oriented. I graduated from UCSC with a degree in Politics (International). After graduation I travelled extensively through Europe. I was also drawn to travel and live in Mexico as well as Chile. I found my first calling as a teacher with Americorps. This set me on the journey to become an English teacher in Mexico, where I met Alejandra, and paved the way to me pursuing and receiving my teaching credential. I also taught in Chile before returning to Maui, Hawaii to be a Language Arts teacher at Montessori Maui and most recently a 3rd grade teacher at Makawao Elementary School for the past 4 years. I have been weight training traditional style for about 25 years but really became inspired by fitness on another level after working with the TRX suspension trainer. The ability to train intensively with few reps and no sets and get astounding results in strength, flexibility, conditioning, and all around general improved wellness was inspiring. After receiving the TRX instructor certification from the TRX center in San Francisco, CA, my knowledge of and desire to become a more effective trainer grew. Having the opportunity to learn and work with Alejandra’s Neurokinetic Pilates NKP at the studio only reinforced my enthusiasm and desire to continue pursuing the exploration and understanding of mind, body, spirit, balance, alignment and wellbeing, Bodywellness. I currently Instruct Basic NKP fundamentals, Intermediate NKP, and High Performance NKP. 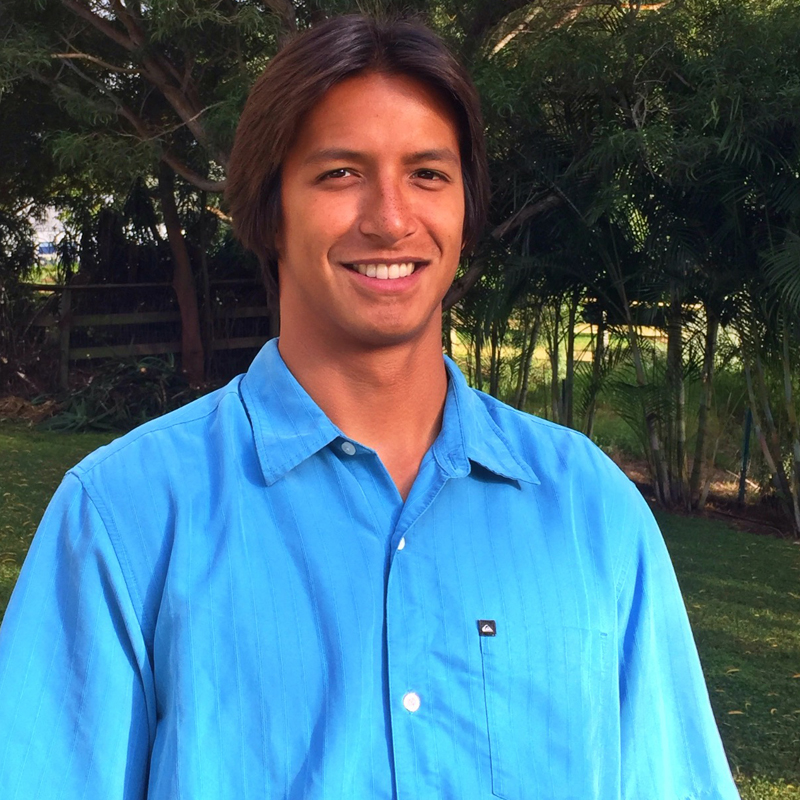 Growing up on Maui, Carlos has always been an avid surfer and has experienced the toll these sports can have on the human body through over working and injuries. He has always been passionate about the health and well being of your body and understands that in order to perform at your full potential, proper maintenance is needed to make sure the body is running like a well oiled machine.

Carlos went to Seabury Hall high school and paddled in an outrigger canoe for 3 years along with surfing. He went to college at Seattle University, and graduated with a degree in journalism. Carlos has played ukulele most of his life and has understood from an early age that playing an instrument, like engaging in a physical sport or activity, all starts with training the brain to tell your body what to do and when to do it. This has led Carlos to Alejandra and the team at Body Wellness Hawaii. 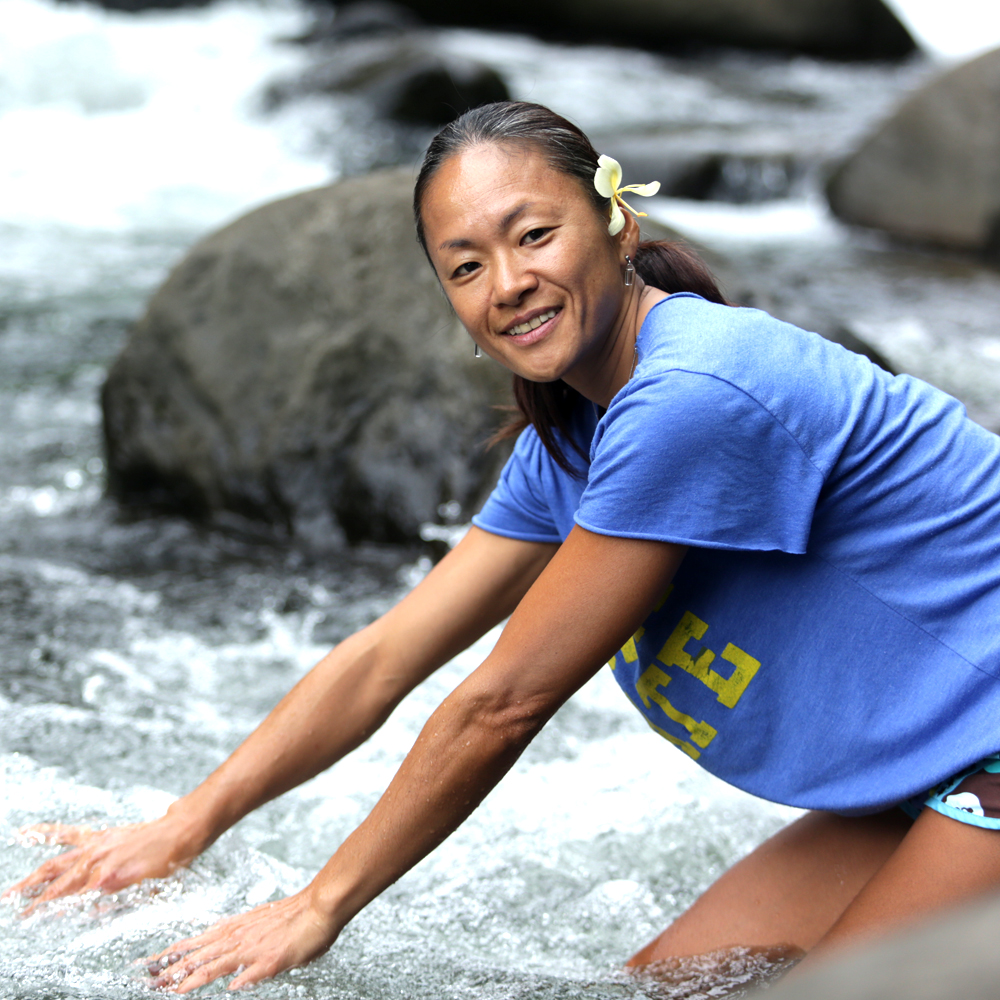 Naoko was born and raised in Yokohama, Japan. Since she grew up playing sports and being active, she decided to go to Nippon Sports Science University and graduated with a diploma of physical education to become a teacher. In the meantime, she played women`s rugby from 1990 to 2002. Thanks to being a part of the rugby team, she had great opportunities to meet so many wonderful people inside and outside of Japan.

After having seven years of experience as a physical education teacher in junior high school in her hometown Yokohama, she worked as an instructor at a sports gym in the town. Her job was to provide a short stretching exercise and mini massage to gym members, and gradually she became interested in giving massage, which gave her a feeling of joy. After moving to Maui in 2003, she went to a massage school and got certified as a massage therapist of Hawaii in 2004. She has been practicing as a massage therapist since then.

While she has been working at a few spa and massage places in town, she had started to feel the need of more specific work that she liked to do in her practice. Her background in being an athlete helped her learn some new modalities such as orthopedic technique, Shiatsu, Thai massage, Myofascial release by anatomy train. After all these years of searching for her passion, she met Kazuko and Alejandra, and Neurokinetic Release. She is currently in an apprenticeship program with Kazuko. She has been learning and fascinated by a great team. 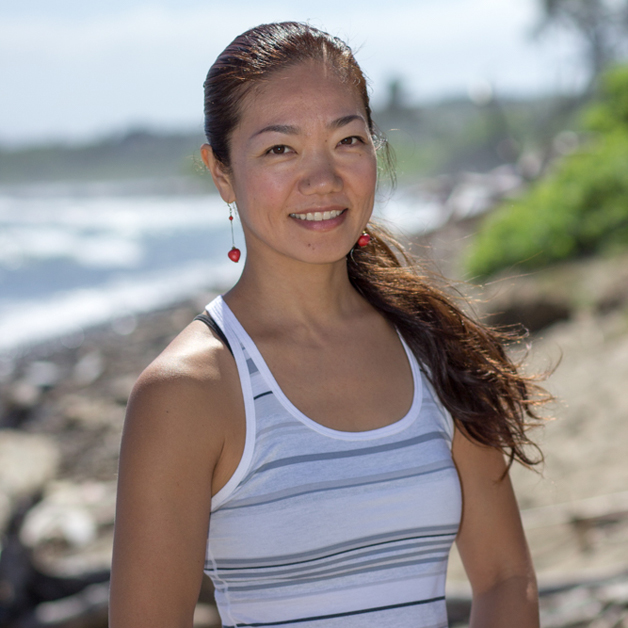 In 2006 Misa came to Maui, Hawaii from Osaka, Japan to learn massage and earned the state of Hawaii Massage Therapist License in 2007.  With years of working at various spas, salons and her own, she started to seek a method that gives clients a more effective treatment.

When her husband strarted to have serious Knee pain in early 2016, she sent him to Body Wellness Hawaii.  After her husband received treatment and training, he was back on his feet and back on the job with no pain.  Misa was so impressed and decided to learn from Body Wellness Hawaii, she spent many hours in their training program so she can follow her passion and join them in helping other people.

Don't Be Shy. Get In Touch.

If you are interested in working together, send us an inquiry and we will get back to you as soon as we can!
CONTACT US